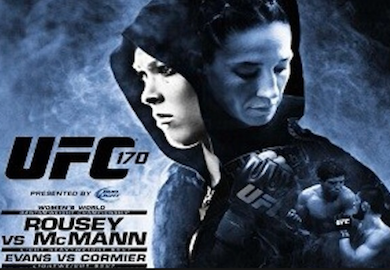 Fight of the Night: Demian Maia vs. Rory MacDonald
Demian Maia surprised a lot of people with his performance in the opening round of his bout with Rory MacDonald. Some thought his dominant and controlling offense should have rewarded him a 10-8 round, which meant MacDonald would have to fight twice as strong in rounds two and three to make a comeback. MacDonald utilized body kicks to chop the gas-tank of Maia in half and that gave him a lot of momentum throughout the remainder of the fight. Despite being exhausted, Maia continued to press forward and attempt takedowns which made for a very exciting fight.

Performance of the Night: Stephen Thompson
Stephen Thompson may be a human highlight-reel machine, but he proved to be an intelligent fighter tonight as well. His striking was on point and he was patient in waiting for his opponent to open up so he could counter. Thompson landed a total of 39 strikes and one knockdown in under four minutes of action. Not only that, but he made Uncle Dana happy by opening up the pay-per-view portion of the card with a knockout. Thompson truly deserves this ‘Performance of the Night’ bonus.

Performance of the Night: Ronda Rousey
Ronda Rousey hushed the naysayers tonight by proving to them that she is not a one-dimensional fighter. In the videos leading up to the fight, her trainers were praising her striking skills by saying that she has dropped men in the gym with liver shots and she will do the same against McMann. Rousey took some serious shots from the get-go but did not back down. As a matter of fact, she continued to press forward and throw punches of her own. The fight ended in one minute and six seconds of the first round after Rousey dropped McMann with a brutal knee to the liver. Fans were protesting the stoppage, but they never felt the force of a knee to the liver. Your body shuts down; It is not a good feeling.