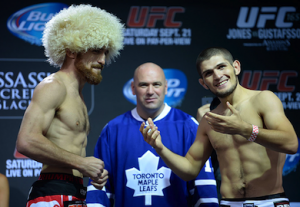 In a fight that went the distance, Khabib Nurmagomedov took to the ground and tired out Pat Healy en route to a decision victory. Nurmagomedov picked his shots in the first couple rounds and ended them with impressive takedowns. In the third round, Nurmagomedov picked up an exhausted Healy, carried him across the cage and slammed him down with authority.

Healy controlled where the fight went, but that’s essentially the only thing he had going for him. He connected with a few counter punches of his own but as his gas tank ran out, so did his offense.

Nurmagomedov is now 5-0 in the UFC.