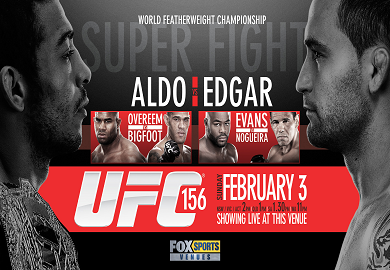 Tonight MMA fans will watch as Frankie Edgar challenges featherweight kingpin Jose Aldo, Alistair Overeem makes his return against Antonio ‘Bigfoot’ Silva, and Rashad Evans hopes to defeat Antonio Nogueira and earn a fight with Anderson Silva, but before that, fans tuned into Facebook and FX for 6 bouts.

Starting with the Facebook fights, fans saw Francisco Rivera mount a comeback against Edwin Figueroa to earn a second-round TKO

Next we saw Dustin Kimura make his UFC debut against Chico Camus in what became a high level Jiu-Jitsu battle seeing Kimura choke out Camus via rear-naked choke.

Tuning into FX we saw Isaac Vallie-Flagg defeat ‘Thug-Jitsu’ master and MMA veteran Yves Edwards via split decision in a back and forth stand-up battle.

Next Strikeforce fighter Bobby Green made a statement in his UFC debut against Jacob Volkmann, securing a read-naked choke victory.

The final prelim fight saw Evan Dunham defeat Gleison Tibau via split decision in a back and forth stand-up fight that had fans on the edge of their seats throughout all three rounds.