Home » UFC NEWS » Tyson Fury: I would beat Cain, then return to boxi... 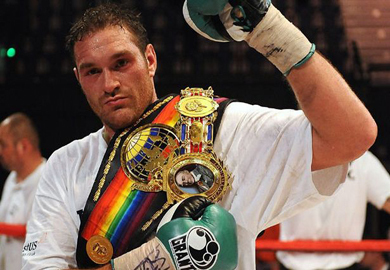 The feud between Cain Velasquez and unbeaten heavyweight boxer Tyson Fury has once again been refueled, this time after Dana White agreed to let Fury come to the UFC and fight Cain Velasquez.

“Come on over and we’ll make a deal, you want to fight Cain? You will get smashed.” Said White via Twitter.

Daily Star reporter Kevin Francis in an interview spoke to Fury about the ongoing feud, Fury had this to say:

“I am 100% up for a fight with him. I’ve challenged him to a fight three times but he’s a little boy who doesn’t want to fight and has said ‘No’ to the fight live on television.”

“I’m definitely interested but the money would have to be right.”

Velasquez believes Fury is just using his name to get publicity,

“I didn’t even know who he was until this and I think he’s using my name to gain publicity,” said Velasquez, adding “which he has done.”

Many MMA fans including Dana White believe a fight between Fury and Velasquez would be much similar to the
Couture vs. Toney fight in which Randy Courture defeated boxer James Toney in devastating fashion.

Fury said the fight would be a “man vs. midget” fight, Velasquez is scheduled to fight Antonio ‘Bigfoot’ Silva at UFC 160.