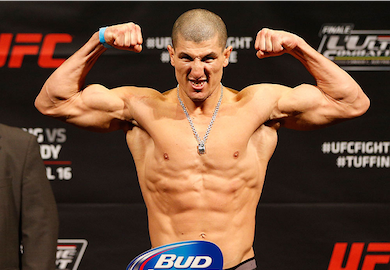 Nordine Taleb proved the bookies right when they labeled him as a -235 favorite. His bout with fellow “TUF Nations: Canada vs. Australia” cast-mate Vik Grujic was extremely one sided.

Taleb looked to be cautious in his attack in the first round, but it soon became evident that he was waiting for Grujic to attack so he could counter. Taleb cut off Grujic’s attack with jabs and kicks and went for takedowns where he dominated on the ground.

Grujic was not so much in danger on the ground as he was trapped. Taleb utilized his body weight to prevent Grujic from bucking out or sweeping to a superior position. Just as soon as Grujic would get to his feet, Taleb would execute another trip takedown or slam.

Nordine Taleb picked up the decision win and improved his record to 9-2, earning his first win since May 2012.