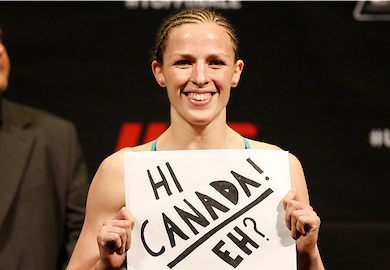 Sarah Kaufman was supposed to fight two other fighters before Leslie Smith became her official opponent. Shayna Baszler and Amanda Nunes both suffered injuries which led to the signing of Leslie Smith. She previously lost to Kaufman at ‘Invicta FC 5: Penne vs. Waterson’ almost exactly a year ago.

Smith fought well for someone who had little time to prepare for a professional fight against a top-ranked bantamweight in the UFC. However, for every shot that landed in favor of Smith, Kaufman landed three or four of her own.

Leslie Smith started to gas late in the first round and you could tell by the way her mouth was hanging open. It affected the way she punched in round two as well; what used to be precise and crisp punches were now sluggish and wild. She abandoned setting up her shots and relied on her chin to stay in the fight.

Kaufman put on a fantastic performance but unlucky for her, Smith is extremely resilient and can take a lot of punishment. Kaufman landed great knees in the clinch and dominated the grappling encounters on the ground. Kaufman is not likely to move up in the rankings because of this win, but it was impressive nonetheless.