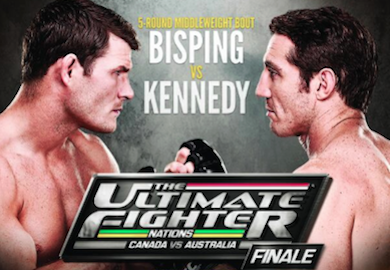 After what seemed like months of trash talk going back-and-forth between the two, Michael Bisping and Tim Kennedy will finally put an end to their feud. The rivalry started back in November 2013 when Kennedy took to Twitter to challenge ‘The Count’ to a bout. Kennedy tweeted, ‘I don’t think I have earned a shot at any of the top guys. I think the UFC should give me someone like [Bisping]”. The tongue-in-cheek remark pushed Bisping to challenge him to a fight which ultimately came to fruition.

The bookies’ odds average around +180 for Tim Kennedy as the underdog, which means if you were to bet $10 on him you would win $18 (total of $28 back). Even though this sounds like an easy way to almost double your money, bettors should always ask themselves if the bet they are about to make is an intelligent one.

When it comes to wagering funds on mixed martial arts, you know you are walking a tight-rope of chance. There are countless amounts of variables that could affect the outcome to a fight. Is the fighter coming off an injury? Are they secretly injured walking into the fight? Will they suffer a cut that causes a stoppage in the first round? No matter the variable, the best way to prepare for them is by ignoring chance and gut feelings. Analyzing statistical analysis is the most reliable way to place an intelligent wager on any sport.

The head-to-head statistical analysis of ‘Bisping vs. Kennedy’ on FightMetric would lead one to believe the fight is closer than it really is. Kennedy and Bisping both go for takedowns quite often, but these takedowns have not been leading to submission attempts as of late. Therefore, we will concentrate heavily on the striking aspect of this fight.

Tim Kennedy’s SApM average of 1.42 is among the most impressive in the entire UFC Middleweight division. It is easy to let numbers like these heavily sway your bet in favor of Kennedy, but let’s do some more digging before you press that ‘Place Wager’ button.

We will perform a series of tests to see if Kennedy’s only statistical striking advantage, his Strikes Absorbed per Minute, will actually aid him in his fight with Bisping.

Why this is such an important fight on his record is because it is the most recent of his two five-round bouts. The bout with Luke Rockhold was for the Strikeforce Middleweight Championship and it went the full 25 minutes to judges’ decision. Throughout the 25 minutes of fighting, Kennedy allowed a total of 70 strikes to land. That results in 2.8 SApM! That is almost double that of his career average which should be concerning for those of you who were favoring Kennedy today.

Test 2: How did Tim Kennedy Get Such an Impressive SApM?
Subjects: Kennedy’s Last Three Victories against Natal, Gracie and Smith

Kennedy had a total fight time of 31 minutes and 16 seconds throughout those three fights. In that 31:16, he allowed 58 strikes to land which resulted in 1.85 SApM. Although that number is right on par with his career average of 1.42, who his opponents were should cause some concern. Natal, Gracie and Smith are all submission specialists who do not excel in striking. As a matter of fact, they have a combined 4 KO wins throughout their 47 career fights— that’s only 8%!

Result: Tim Kennedy’s strikes absorbed per minute average is useless and should not be taken into consideration for his fight with Michael Bisping. As a result of this, Kennedy’s only striking advantage has been taken away.