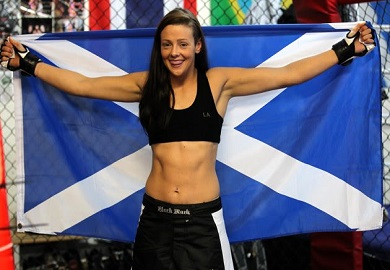 In the latest episode of The Ultimate Fighter 20, #2 ranked Joanne Calderwood took on #15 ranked Emily Kagan.

In the first round both fighters looked hesitant to exchange, with Calderwood landing a high volume of leg kicks throughout the first minute of the round. As the round went on there were brief exchanges that were razor close, with one notable exchange that saw Joanne Calderwood land a hard knee to Kagan’s body. Towards the end of the round there was a cage clinch that saw both fighters get dominant position at one time or another.

Dana White says there’s no third round and reads the decision.