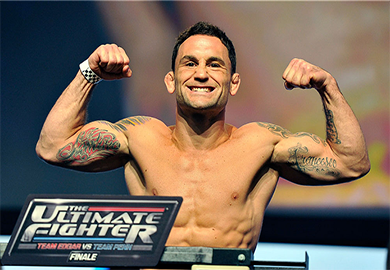 The trilogy may be over, but BJ Penn’s legacy will live forever in the UFC Hall of Fame. Frankie Edgar, on the other hand, could stumble upon some UFC gold in his future with his win tonight.

While standing, Penn looked light on his feet and ready to stuff the takedown. Edgar, on the other hand, was not looking to shoot and was contempt with standing. This created issues for BJ Penn that he would need to adapt with throughout the fight.

Penn spent the majority of the first round on his back, waiting for Edgar to dive into his guard. This let Edgar pick his spots and dive in only when it benefited him, and he landed some good shots from the guard of Penn.

In between the first and second, Edgar was told by his corner that he overhand right was there “all day”. Edgar benefited greatly with this advice and peppered Penn with it multiple times in the second. Once the fight went back to the ground, it was almost a copy of the first round; Edgar picked his shots and landed some big ones. Walking back to his corner after the second, Penn sported a mouse under his left eye.

Penn found success in the third with his jab, but before he could follow it up with anything Edgar would answer with a shot or two of his own. Edgar shoved Penn down to the ground and hopped in his guard in the middle of the round and busted Penn open with a brutal cut over the left eye.

Edgar trapped Penn in the crucifix position from side control and slammed repeated elbows and fists into the face of Penn. After transitioning back to Penn’s guard, Edgar continued his assault. Herb Dean told BJ Penn he needed to see some work or else he would stop the fight, but Penn continued to absorb punishment.

Herb Dean stepped in and called a stop to the fight in the third round.

After the bout, BJ Penn stated that he agreed with what Dana White said before about this being his last fight if he lost. Penn’s retirement has not been confirmed yet, but it is likely that this was the last time we got to see Penn fight in the octagon.