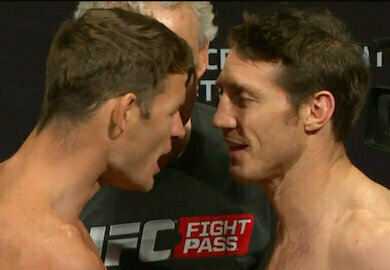 Tim Kennedy came out on top after five full rounds with temporary-rival Michael Bisping at ‘The Ultimate Fighter Nations Finale’. Walking into the octagon as a two-to-one underdog, almost nobody gave Kennedy a chance to win this fight if it went to decision. Kennedy shut the doubters up with a dominant performance, but he still is not happy with the win.

During the post fight press conference, Kennedy shared his thoughts on the victory. “It was a big win. It is the biggest opportunity Dana White has ever given me. I dominated Michael Bisping. He’s been in the top five for forever. I’m just super disappointed I didn’t finish him.”

Michael Bisping absorbed everything Tim Kennedy was throwing at him, but he would not give up. There was a point where Bisping was wobbled but Kennedy was not aware how out of it he was and didn’t follow up.

Kennedy continued, “That’s what I always come here to do, finish fights. I hurt him on a bunch of occasions. This fight didn’t do what it was supposed to which is move me into like, ‘This guy should be fighting for a title.’ It’s a big win. It’s the biggest of my career, it just didn’t put me where it should have.”

Tim Kennedy is currently ranked at #8 in the middleweight division. Who would you like to see him face next? Share your thoughts in the comment section below!