Home » UFC NEWS » The MMA World Reacts To The Tragic Passing Of Shan... 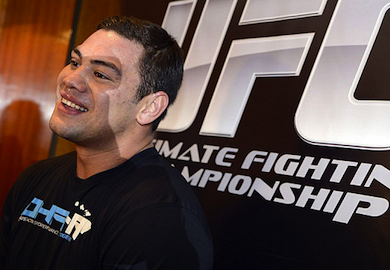 Yesterday, BJPENN.COM was the first to report on the tragic passing of UFC heavyweight fighter, Shane Del Rosario.

Today we have a group of twitter posts from popular MMA Figures expressing their condolences for the loss the MMA world just suffered.

Shane Del Rosario passed away after two-weeks of hospitalization, fighting through the final days of his life after a cardiac arrest.

The world mourns the former Strikeforce heavyweight and kickboxing world champion and on the heels of his departure from this world we bring you the following words from the MMA community:

RIP to one of the best people I've ever had the honor to have in my life and call my best friend.… http://t.co/P1uFUomU91

Truly saddened to hear about the passing of Shane Delrosario. R.I.P. My thought are with his family.

Sad to hear about my fellow warrior Shane del Rosario passing away. My thoughts are with his family R.I.P

RIP Shane Del Rosario. Keep his family and friends in your hearts and prayers #MMAfamily

RIP Shane Del Rosario, always was a good time n vibes hanging with you my man. My daughters even… http://t.co/7Yk0fdFhnO

RIP SHANE U WILL BE MISSED

RIP Shane. Thoughts to his family and friends. http://t.co/6d36SOobAr

Yes, it is true. My teammate Shane Del Rosario has passed away. RIP Shane :(( #TeamOyama

RIP Shane. You were one of the nicest guys I ever had the pleasure meeting in this business. A fighter to the end.