Texas Commission Overturns Eye vs. Kaufman Decision To A No Contest

It would appear as if Sarah Kaufman might have unjustly had your UFC debut win overturned to a no contest.

Following their UFC 166 bout, Sarah Kaufman, was very vocal about her thoughts on the decision victory awarded to her opponent. She thought the judges got it wrong.

Now, for an undisclosed reason, the Texas Athletic Commission has overturned the original decision into a no contest (no decision).

The original scores were:

By my standards, the fight was close, but not so close as to warrant an after the fact change of decision.

The two females took to twitter to give their reaction to the recent news: 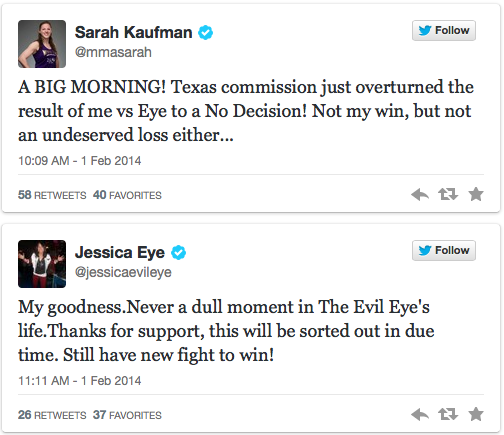