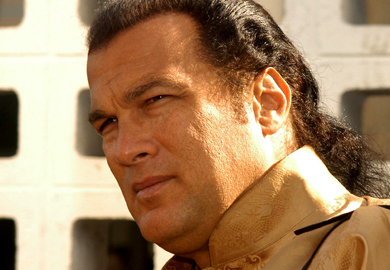 “I have to wonder what his intentions may have been in saying that. I always thought that Randy was my friend and a gentleman. I’m kind of confused why he would say that, but I’m here, anybody can find me any time and any place. If Randy really wants to fight me, he can fight me any time he wants”

“It would be for free, and it would be some place where there are no witnesses. I’m hoping it wouldn’t get to that, and I don’t know why it would come about, but if that’s what he wants, he can get it any time he wants.”

“I don’t play by the rules. I’m sure one person will walk out. I’m a man of honor. I’m a gentleman, but I am a warrior, and if he needs to find me, he knows where to find me.”

– Steven Seagal on MMAFighting.com’s “The MMA Hour: where he also discussed the talent level of GSP (see below).

“I think he’s is a really nice guy. I think he is a good fighter and a good martial artist. Would I call him great? No.

“I just think he’s a wonderful and good martial artist and good guy. Some people are born with greatness, and some people sort of acquire it. But I think with time, he will become better and better.

“If you look at GSP’s worst fight, you look at the thing he did with Shields in Canada, that was atrocious. I think that is very telling. I just didn’t think the technique and the fighting skill was there in that instance. I also saw him after the fight and he wasn’t looking or feeling very well either, which does have some meaning. I think he got hurt in that fight and whether he dominated him or not, I just didn’t think he looked good.”

“Aside from all of that, I think Anderson is just a lot more skilled, and I think he would win handily.”