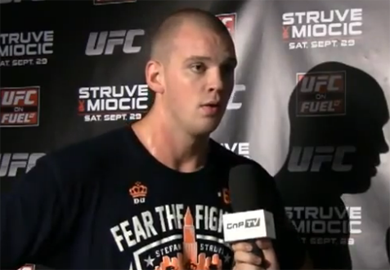 At 7 feet tall and 270 pounds, Stefan Struve is easily the largest fighter on the UFC roster. Winner of four in a row, and six of his last seven, Struve will look to extend his win streak with a victory over MMA veteran Mark Hunt in Saitama Japan this weekend. Struve believes that with a win, he would be a clear number one contender for a title fight.

“When I win this fight, and I finish this fight yet again, then I’m on a five-fight win streak with five finishes in the heavyweight division,” Struve says of his upcoming bout at UFC on FUEL 8. “Nobody else in the heavyweight division is on a five-fight win streak. I think I have a pretty strong bid to call myself No. 1 contender.”

This sense of confidence is a change of style for the recently turned 25-year-old. Stefan Struve is maturing, and with that maturity has come a very successful stretch in the UFC Heavyweight division. Ever-evolving, Struve admits that he was thrown into the UFC a bit early, and did not have the growth and development yet to beat the guys at the top of the weight class.

“There’s a lot of different things that need to happen before you really can measure yourself with the top guys in the division,” says Struve. “But I think we’re doing all the right things. People expect a little bit too much too soon. I was 21 when I signed my UFC contract. 21 for three days when I fought Junior dos Santos. What do you think happens when a 21-year-old enters the UFC? He’s not going to take the division by storm. He’s going to need his time to become a better fighter, become bigger and stronger, grow into his body.”

Growing into his body has been something Struve has been vocal about for the past few years. Fighting at 250 pounds is actually quite slim for a person who is seven feet tall. However, Struve has packed on a good twenty pounds of girth for the Mark Hunt fight, and he insists this has been a crucial next step in his maturation as a fighter. This next step has given him a tremendous amount of confidence.

“The sky is the limit. I’m looking up, and I’m looking for that heavyweight belt in the next one or two years. Most heavyweights peak in their early thirties. So if you look it that way, I still have a couple of years to go to become a lot better, bigger, stronger, whatever, still no rush. Although, I feel like I can beat anybody in the world right now, and I feel like I can win a world championship.”

Stefan Struve has entered a new chapter in his career. His mindset is drastically different from when he first started fighting at heavyweight as an overgrown 16-year-old boy. Each fight Struve wins is another bridge crossed, and another chance to prove to his naysayers that he is a top-level guy in the Heavyweight division.

“I hear before all my fights that I’m not the favorite,” says Struve. “Still now I read my Twitter to be in touch with my fans, and I get a lot of people saying, ‘He’s going to put you in a lawn chair,’ and whatever. ‘He’s going to knock your head into the third row.’ So was Pat Barry, so was Dave Herman. So was Lavar Johnson, and so was Stipe Miocic. People keep saying I’m going to get knocked out, and whatever, but I don’t care about it. I keep on showing that big strikers are not a problem anymore. They may have been at the beginning of my career, but not anymore. If this fight stays on the feet, and I fight smart, then it’s my fight to win,” he finishes. “And I have a good chance to knock Mark out.”

This weekend Stefan Struve has the opportunity to shut down his critics and move himself one step closer to the UFC Heavyweight Champion belt. This is one fight you better not miss.