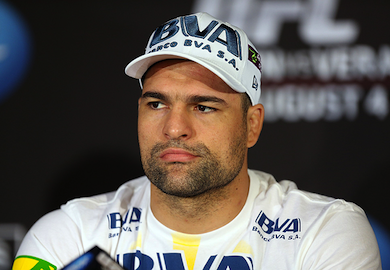 Mauricio ‘Shogun’ Rua has left an impressive and nearly unmatched trail of bodies behind him as a light-heavyweight fighter.

The former UFC champion was at one point the most feared man in the sport.

As times change and new faces emerged the likes of Jon Jones and Alexander Gustafsson, the former champ has found mixed success inside the Octagon since losing his title to the aforementioned Jones back at UFC 128.

His title defeat, followed by losses to Dan Henderson, Gustafsson and Chael Sonnen have sent Rua down a tough road, going just 2-4 since 2011.

Looking at a possible reinvention the fighter known simply as ‘Shogun’ is contemplating a shift down to the UFC’s middleweight division.

“It might happen, but for now I have a fight scheduled,” Rua said during a recent Q&A in Brazil. “I would have to do some medical exams to check if it’s possible… My normal weight is 228, 231 pounds.

“Maybe I can (drop to 185) and maintain my performance,” he said. “I would need to think about it, but that’s something that can happen.”