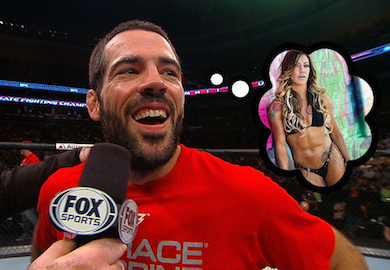 “The whole fight we have women in one room, men in another room,” says Brown as transcribed by MMA fighting. “Rousey and Miesha come on and all the women just fucking gather around the TV like it’s the fucking Kardashians coming on.”

“I always said, ‘I don’t know why they put women in the UFC.’ Now I know why… I just think this, if I’m to pay $60 for a Pay-Per-View to watch women fight they should at least be topless.”

“How many knockouts do you see in women’s fights? It’s not really my thing, I respect what they do, but look, they don’t have the body type or the power, all that s—, for knockouts. If you’re not a good grappler in women’s MMA then you’re behind. It’s no different than the 125 division of men’s MMA in that they’re just really not built for knockouts.”

UFC welterweight fighter Matt Brown has a really surprising stance on Women’s MMA and someone gave this man his own podcast to talk about it.

Anyone as shocked as I am? Or do you agree with the Columbus Ohioan’s opinion on the subject?