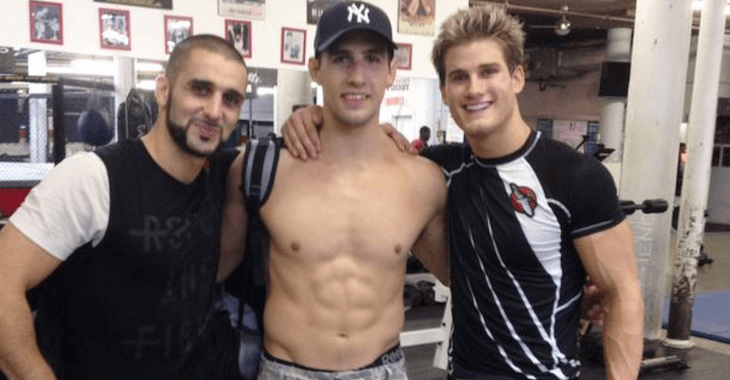 UFC newcomer Sage Northcutt is currently the talk of the MMA town. The lightweight fighter is currently 6-0 in professional MMA and is coming off of his UFC debut, where he took out Francisco Trevino in only 57 seconds.

After that fight Northcutt traveled to Canada and is currently working with Tristar, the gym where fighters like Georges St-Pierre and Rory MacDonald train.

He’s been busy sharing pictures with fans, showing them all the new friends he’s making. In his recent set of pics we see Northcutt hanging with welterweight title challenger MacDonald and some more of Tristar’s fighters.

Just finished some Jiu Jitsu and technique with @firas_zahabi at TriStar pic.twitter.com/GhaC9sRyje

Obviously Northcutt just fought so there’s no word on who his next opponent will be. So in the meantime let’s just play matchmaker.

Who do you think the 19 year old phenom should fight next?

Fellow UFC lightweight Kevin Lee took some time to call out ‘Super’ Sage, so maybe that fight would make sense, but most likely the UFC will look to set him up with an opponent more on his level, although really, we don’t know what his level is yet.

Give us your thoughts and pick the matchup you want to see for Northcutt next!

Sage is a multiple time Karate world champion, but he’s not limited to just strikes. The 19 year old phenom boasts a 33% submission rate, finishing two fights with his Brazilian Jiu Jitsu skills. The up-and-comer was discovered by UFC President Dana White, personally, and has been marketed more than most UFC newcomers, in recent history.

Outside of the likes of Kimbo Slice and Ronda Rousey, Sage Northcutt has probably garnered the most pre UFC debut hype and promotion to date.

But why? Is it his looks, his skills, or the combination of the two? And will he be able to live up to the hype?