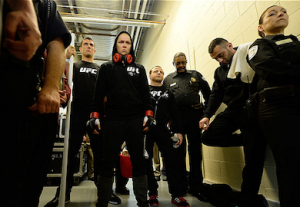 UFC women’s bantamweight champion, Ronda Rousey is scheduled to fight Alexis Davis on July 5. So does that mean all the talk about Cris “Cyborg” Justino and Gina Carano will stop? No. Rousey recently spoke with Yahoo! Sports about Davis as well as Cyborg, Carano and Holly Holm.

In the interview Rousey praises three of the women for their fighting abilities. Then she talks about Cyborg. Here’s what she had to say:

“I’ve said before, I don’t care if she’s injecting horse semen into her eyeballs, I’ll fight her, but that’s just my personal decision. But I can’t make a decision for the whole division. I can’t say it’s the right thing. This girl has been on steroids for so long and [has been] injecting herself for so long that she’s not even a woman anymore. She’s an ‘it.’ It’s not good for the women’s division. It’s not good at all.

“If she comes in the UFC and I beat the [expletive] out of her and then I retire and become an action movie star, then the UFC is still going to be stuck with her. The division could die. She could ruin the whole sport. Even though it’s a fight a lot of people want to see, even if I beat the living crap out of her, it won’t be good for the sport because then she’d still be in the UFC.”

Horse Semen. That’s a new one.