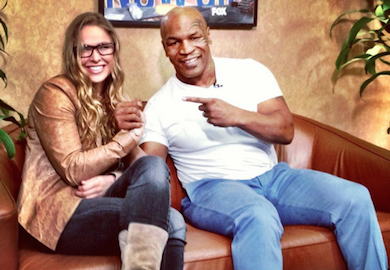 “I can’t do anything right for some people. I train harder than all these girls. I’ve worked to be the best in the world. People still find something wrong with it. It’s not because I have no competition. The competition out there is amazing.

“It’s that I plan for every fight so precisely. … So I don’t think it’s a bad thing at all that I’ve been so dominant in my last couple fights.”

“Mike Tyson had some serious competition too, don’t forget. It wasn’t always easy. People knew from those fights to get there immediately.

“You never know what’s going to happen in one of my fights, either. That’s the advantage I have over my opponents and what draws the fans in so much. From the second my fight starts to the second it’s over, nobody sits down.”

In a recent interview with the L.A. Times, UFC champion Ronda Rousey makes no apologies for her dominance inside the UFC’s cage.

“(it’s) like saying they should have had some better fights for Mike Tyson. The Tyson era was one of the most awesome eras in boxing history.

“You hear Ronda Rousey’s last fight went 16 seconds and you’re like, ‘Sixteen seconds?’ But what she did in those 16 seconds was un f—ing believable. For 16 seconds, she traded punches, knocked her out with one, caught her under her arm, kneed her to the stomach, threw her, and then hit her with about 15 punches. That all happened in 16 seconds.”