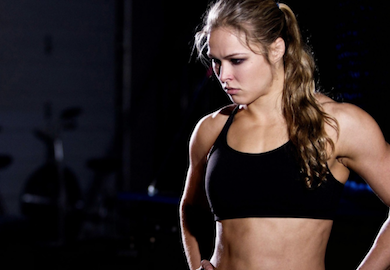 Rousey is one of the UFC’s most popular fighters, but we are quickly learning that it may actually be Hollywood who is “Rowdy’s” biggest fan.

Prior to her bout with Miesha Tate at December’s UFC 168 event in Las Vegas, Rousey filmed movies “Expendables 3” and “Fast & Furious 7.”

Now, it appears that Warner Bros. is looking to have Rousey star in a lead role in the movie-version of the hit HBO series “Entourage.” If that wasn’t enough, Warner Bros. has also pegged the UFC Women’s Bantamweight Champion for a lead role in the Brad Thor penned novel “Athena Project,” which would likely turn into a movie franchise if successful.

News of Rousey’s Warner Bros. offerings was reported on Thursday by Variety.com, and backed by Rousey’s sharing of the article via social media. Props to MMAWeekly, who first caught wind of the news.

Rousey will put her UFC title on the line against Sara McMann February 22 at the UFC 170 event which airs live from the Mandalay Bay Events Center in Las Vegas. Ronda is then scheduled to head into filming for the new “Entourage” movie in mid-March.

Thus far, “Rowdy” has done an excellent job of juggling her MMA career with her newly presented opportunities in Hollywood. But, one can only wonder if the movies, along with the Hollywood lifestyle, will eventually sway her away from the “fight game.”