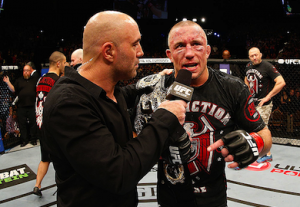 GSP has a love child?

In an interesting twist, popular celebrity gossip outlet, TMZ, is reporting that the personal issues GSP was discussing during his UFC 167 post-fight speech have to do with getting a female pregnant.

“I have issues, man. I need to relax. I need to get out for a while. I don’t know what I’m going to do,” stated the champ following his controversial decision win over Johny Hendricks.

Now TMZ broke the scoop as to what’s ailing the Canadian:

Sources familiar with the situation tell TMZ Sports … Georges’ dad is dying and it’s derailed him.

And there’s this … GSP recently learned he knocked up a woman — and he doesn’t want to have a baby with her but she insists on keeping it.