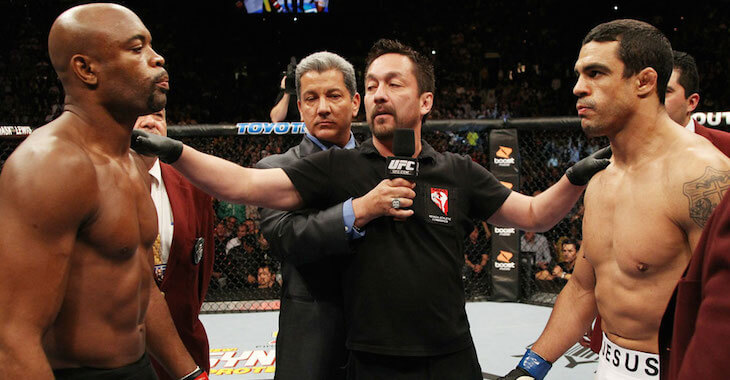 Anderson Silva has been forced to watch the action from the sidelines after getting busted by the NSAC for performance enhancing drugs after UFC 183. “The Spider’s” return to the octagon could rock the world of mixed martial arts, according to a report.

UFC 197 takes place in Brazil at the HSBC Arena and could host a major main-event. According to Jornal Oglobo, a rematch between Vitor Belfort and Anderson Silva is expected to be announced for UFC 197. The card takes place in March 2016.

Just last week, Dana White stated on the Joe Rogan Experience that the company was working on making the bout become a reality.

Belfort has been patiently waiting to avenge his 2011 loss to Silva when they met at UFC 126 in Las Vegas, Nevada. Since suffering that front-kick knockout loss, Belfort has accrued an impressive 6-2 record with losses only to champions Jon Jones and Chris Weidman.

Silva, on the other hand, has only racked up three wins while suffering two losses and a no contest since his victory over Belfort. If the bout is actually set and the only thing the parties involved are waiting for is the announcement to be made, who do you think will walk out of the octagon as the winner five years after their first meeting? Will this be the biggest UFC bout to ever take place in Brazil? Share your thoughts and make your predictions in the comment section below!