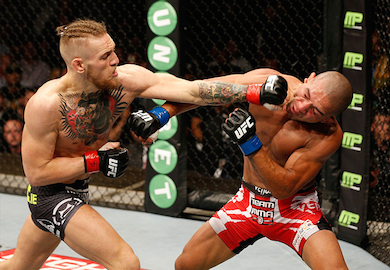 As usual, the MMA community took to twitter with their reaction.

When he's not talking crap about me, I kinda like the kid lol

We gotta give it up to him. He talked like no tmw and surely backed it up. He even ate some solid shots from a tough Brandao. #UFCDublin

I am emotionally exhausted after watching McGregor vs. Brandao #UFCDublin

Well there we have it. #Impressive who next? @ufc

. @TheNotoriousMMA is a special talent. Good fight back from injury. #UFCDublin 5 wins As he predicted, Conor does it in Rnd 1.

I can't wait to heal up and get back at it.

Give Connor a good wrestler and his hype will die quick

Nice job @TheNotoriousMMA , DP you got next? @DustinPoirier

"@dc_mma: Nice job @TheNotoriousMMA , DP you got next? @DustinPoirier" I'm not impressed.