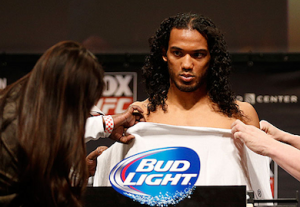 UFC on FOX 10 is over and the main event has left many with a sour taste in their mouth. The fight was a great back and forth battle that went all five rounds. Ultimately the judges gave it to Benson Henderson via split decision, with one judge scoring it 49-46 in Henderson’s favor.

Fighters took to twitter to voice their opinions and thoughts on Saturdays main event:

I saw it close. Both Friends and hate to watch those types of fights.

Judges can be a real bummer. @THEREALPUNK was robbed. Still deserves a title shot. #UFConFox10

There is an easy solution to bad decisions…. Don’t leave it to the judges baby!! Eh @BurtWatson4real

Congrats on your win @BensonHenderson !

Judges give a split dec to Henderson. I had him winning but there were definitely some close rds #ufconfox

That decision was bullshit @UFC Thompson won that fight !!!