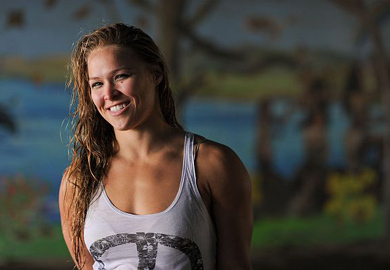 Earlier this week we featured a quote from female fighting stand out Miesha Tate. In the quote she responds to comments made by UFC welterweight champion, Georges St-Pierre, and his views on women’s MMA.

Here is what she said:

“I think the problem with GSP’s view about WMMA is that he doesn’t have one. If he hasn’t ever watched us women fight then he can’t say how he really feels about it because he’s ignorant.

If everyone felt about MMA as GSP thinks he feels about WMMA, then he wouldn’t have a job.

I’m hoping George St. Pierre can open his mind a little bit and actually watch some women’s fights. We’re coming to the UFC for a reason and it would be nice to have one of my all-time favorite fighter’s full support.

It won’t take long for him to realize we aren’t these fragile little creatures when we enter the cage, we are warriors and every bit as deserving of respect as the men.”

Now, the star of WMMA and the lady to dethrone Tate off her Strikeforce throne, Ronda Rousey, took to twitter to respond: 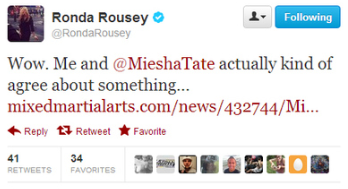