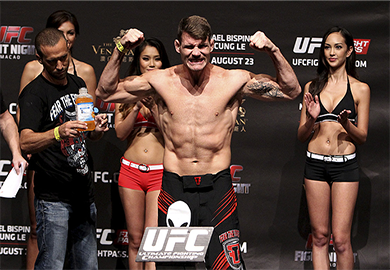 Yesterday morning we saw Michael Bisping brutally decimate Cung Le for 4 rounds before finally finishing Le. As they always do, the UFC pros took to Twitter to react to the brutal main event. Check it out:

77 years about to collide between Le-Bisping.

Le is bleeding. Also he can't open his right eye. Seems like he was accusing Bisping of poking him. Need to see replay. Bisping gaining mo'.

Le busted open now. Goldie confirms via the truck that it was a punch, not a poke, that nailed Le in the eye.

Starting to turn into a Van Damme movie…

Bisping's beating the bejesus out of Le.

No way they're going to let Le continue after this round. His eye is quickly swelling.

Le is a mess. At this point, can't even blame him for low blows. He can only guess at where Bisping's groin is.

Cung Le is bleeding all over the shop, unless his corner can't work miracles with the cut, it's a matter of when, not if, this gets stopped.

“@ChuckMindenhall: Le's face doesn't look like it'll last another three rounds.” Be surprised if it goes one more

Man I thought @CungLe185 would be backing away in this 3rd but he's being aggressive. He's tough as fuck. #UFCMacao #BothEyesSwollen

Bisping's corner is squeegeeing Le's blood off of his thorax.

Michael Bisping with the TKO win over Cung Le in the 4th round. Good win for him right there #UFC

FLORIAN: so Cung what's next for you? LE: [unintelligible squishing noises] pic.twitter.com/4a1wGK7EV2

I whant see @bisping vs @LukeRockhold lets do it @ufc