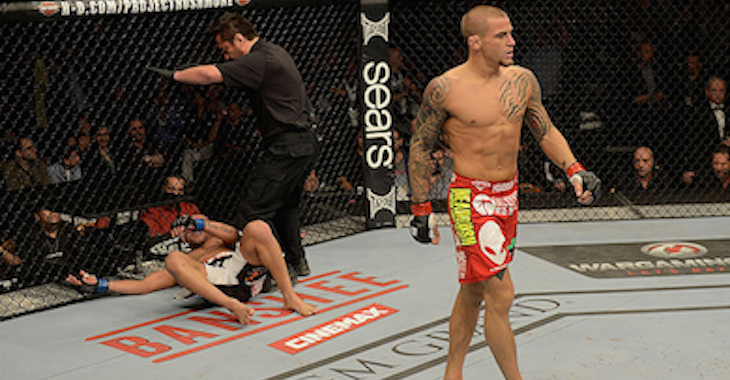 However, yesterday it was announced that “Irish Joe” had suffered a concussion in training and would not be able to compete in this Saturday’s main event.

When the news hit that Duffy was not going to be cleared by doctors, the UFC immediately contacted Poirier and offered him a replacement fight with “TUF: Smashes” winner Norman Parke.

After speaking with his coaches, “The Diamond” decided that a fight with Norman Parke was not in his best interest, as he explained to MMAJunkie:

“Duffy’s been in my crosshairs. They did offer me Norman Parke. They said, ‘Hey, Norman Parke will fight you.’ I was going back and forth … but they needed a decision right now, so I sat back with my coaches and talked to my coaches. They said if we can get the fight rescheduled, let’s just do that. We want the guy we’ve been preparing for.”

Besides Parke, several other fighters offered to jump in and fight Poirier on short notice, including Ross Pearson and interim UFC featherweight champion Conor McGregor. While the UFC did not offer either of those men to Poirier as a replacement, “The Diamond” says if they had, he would have turned them down too.

“I didn’t know all (those fighters offered to step in), but I’ll fight all of those guys – no problem; but let’s set it on paper,” Poirier said. “This is a business. I’m a professional athlete. This isn’t, ‘poke somebody and start a street fight.’ I was contracted to fight a guy who I prepared for, and it didn’t happen. Now we’re not just going to scramble and pick a guy and fight.”

“They said it was up to me, and I talked to my coaches and we made a business decision, really. This isn’t a Toughman competition; you don’t just fight everybody because they want to fight. When I step in there, I’m going to be prepared, and I’m going to fight my ass off and be willing to fight ’til the death. But I’ll be ready for the person I’m fighting.”

Poirier went on to say that if he ‘needed the money’, then he would have taken the fight with Parke. But as of right now, his focus is on moving up the 155-pound ladder:

“I’m done making foolish decisions and running into fights and fighting off emotions and this and that. I’m a professional, and I’m going to the top and I’m going to do it right. He also hinted that we may still see the fight against Duffy — only on a later date. I talked to Dana (White) as well and he said we might be able to get this fight rescheduled, so I’m hoping for that, maybe in January in Vegas. Or whenever he’s healthy.”

Do you think Poirier should have taken the replacement fight offered to him by UFC officials? Sound off Penn Nation!