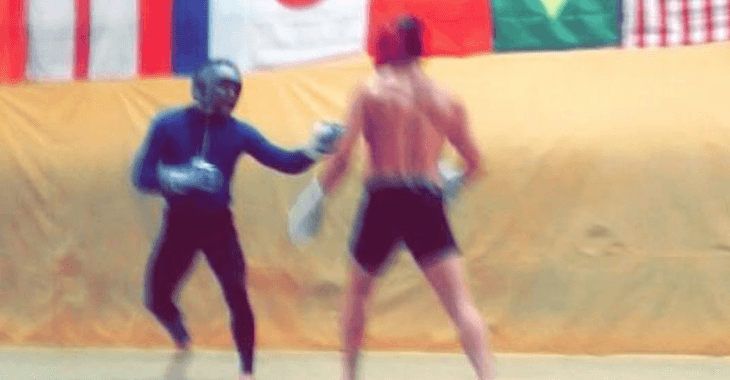 UFC’s interim featherweight champion Conor McGregor is in the gym and preparing for his massive fight with current champ Jose Aldo.

The two will finally meet as UFC 194, which is scheduled for Dec. 12 in Las Vegas. It’s set to be a massive event, with Aldo vs. McGregor headlining, Chris Weidman vs. Luke Rockhold co-headlining and then a ton of exciting fights before that. It will cap off a three day/three event series for the UFC, with a Fight Pass card on Dec. 10, TUF 22 Finale on Dec. 11 and then the mega UFC 194 on Dec. 12.

McGregor took to his Instagram and posted a picture of himself and UFC welterweight Gunnar Nelson sparring. What’s that, the pic is blurry you say? Well McGregor says it’s because they’re just to fast for the camera.

Nelson is expected to face off with submission ace Demian Maia, also at UFC 194. He’s coming off of a win over Brandon Thatch at UFC 189, where McGregor pulled off a big win over Chad Mendes in the main event.

Aldo vs. McGregor was supposed to take place in the UFC 189 headlining slot. Unfortunately for fight fans the UFC featherweight champion fell off the card due to injury, making way for a Chad Mendes vs. Conor McGregor intern title fight, on the pay per view fight card.

The result was a Conor McGregor victory, setting up the UFC 194 bout between Aldo and the Irish man.

Mendes took the fight on two weeks notice, and according to Team Alpha Male founder Urijah Faber he took the fight with a broken foot. For his part, Mendes seemed to take McGregor down at will, bloodying up Conor’s face before succumbing to a TKO loss due to McGregor’s strikes.