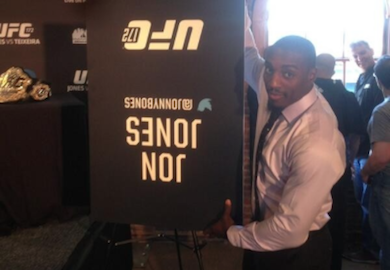 I’m hanging Jon Jones upside down. But not for the last time.
– Phil Davis

‘Mr. Wonderful’ is fighting Anthony ‘Rumble’ Johnson in this weekend’s UFC 172 co-main event, but his constant discussion of Jon Jones would lead you to believe otherwise.

When asked about his upcoming fight and opponent during yesterday’s media event, Davis responded with,

“Sir, how many times do I have to tell you? Stop bringing up Anthony Johnson. How did we get back on this? We’re talking about Jon Jones right now.”

“[Johnson] hasn’t fought the top names at light heavyweight, and I’m going to give him his first introduction to what a real light heavyweight does. I honestly think Anthony Johnson has a game that is better suited for heavyweight, but maybe he needs to fight me to realize that.”

Mr. Davis also discusses Jon Jones, the fight he is obviously campaigning for.

“What I would do is I would charge right across the cage, punch Jon Jones in the face, take him down, beat him up and rip one of his arms off. In fact, I would train with Ronda to get her technique down. She has a good armbar. It’s pretty nasty.”

“He’s the champ, and he needs to learn that I soon will be the champ. So he should probably just either just give it to me, which would be the easiest thing, or he could fight me and he could give it to me that way. Probably the easier way would be to just give it up, just walk over here and say, ‘You know what? Honestly, I’m scared. I’m just going to give you the belt.'”

“If Jones got beat, that’s just proof that he’s a chicken and he lost to Glover so he didn’t have to fight me next.”