Pat Miletich will be the next UFC Hall of Fame inductee 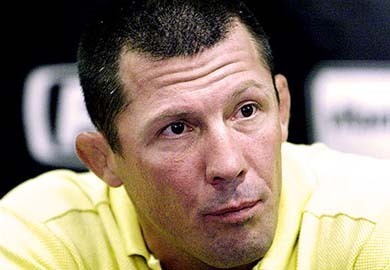 According to the online schedule for next weekend’s UFC Fan Expo in Las Vegas, former UFC welterweight champion, Pat Miletich (29-7-2 MMA, 8-2 UFC), will be the next man to join the hallowed halls of the UFC Hall of Fame.

“The Croatian Sensation’s” UFC Hall of Fame induction is slated for next Sunday, July 6, at 2:30 p.m. ET on the UFC Fan Expo’s main stage.

Miletich made his octagon debut in 1998 at UFC 16, where he won the promotions welterweight tournament, this by defeating Townsend Saunders and Chris Brennan in the same night.

At UFC 17.5 (also known as “UFC Brazil: Ultimate Brazil”), Miletich earned a split-decision victory over Mikey Burnett to become the UFC’s first-ever 170-pound champion. At that time, the title was known as the ‘lightweight championship,’ but it was later renamed the ‘welterweight title.’

Miletich would eventually lose the title in 2001, when he was submitted by Carlos Newton at UFC 31 in New Jersey.

Pat would compete under the UFC banner for a final time in March of 2002, but was defeated by Matt Lindland in his final bout with the promotion.

Miletich would later serve as a coach on the now-defunct International Fight League (IFL), a team-based MMA promotion that debuted in 2006.

That same year, after a four-year layoff from fighting, Miletich would square off with fellow MMA veteran Renzo Gracie, where he ultimately suffered a submission loss at the “IFL 9” event.

Fans can now hear Pat on AXS TV Fights, where he calls the action alongside Michael “The Voice” Schiavello.

Congratulations to Pat Miletich on an amazing MMA career and his well deserved spot in the UFC’s Hall of Fame!

This article appeared first on BJPENN.COM
- Advertisement -
Previous articleREPLAY! | James Te Huna’s Crew Shows Out In ‘Fight Night Auckland’ Walkout
Next articleNate Marquardt:“I believe this is where I’m supposed to be, at 185.”