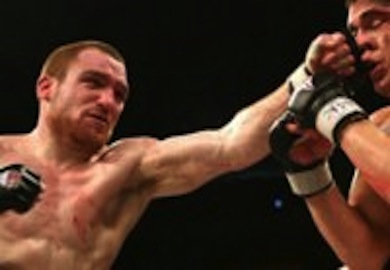 Strikeforce has had its share of obstacles in 2012 as it was forced to cancel several events due to injury. For its final show, Strikeforce has put together a stacked card to finish off what was the UFC’s main ‘competition’ among the world of MMA promoting.

One of the fights rounding out the preliminary card was Strikeforce veteran Pat Healy who was expected to take on former #1 lightweight contender, Jorge Masvidal, after a title fight with Strikeforce lightweight champion Gilbert Melendez was scrapped. Masvidal was forced out due to a back injury.

Now, (according to sources close to MMAWeekly.com)Healy will face his third potential opponent and Strikeforce newcomer Kurt Holobaugh. Kolobaugh is a submission specialist with six of his seven victories coming by way of submission on his flawless 7-0 record. The fight will take place on the Showtime Extreme preliminary card on Strikeforce: Marquardt vs. Saffiedine which takes place January 12th at the Chesapeake Energy Center in Oklahoma City.

The main event (and final Strikeforce fight) is a welterweight title fight between Nate Marquardt and Tarec Saffiedine.

Healy will look to make a statement win over a promotional newcomer to make the transition into the UFC a smooth one.

This article appeared first on BJPENN.COM
- Advertisement -
Previous articleVIDEO | Behind The Scenes At UFC 155 | UFC NEWS
Next articleVIDEO | A Swollen JDS Says He Hurt His Face Against Cain Velasquez