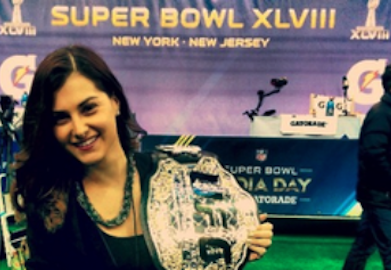 Can’t we all just get along… NO!

Earlier this morning, UFC reporter Megan Olivi was in attendance at the Super Bowl media day, where she spent time interviewing NFL stars and having them pose with one of the UFC championship belts.

Apparently that did not sit to well with NFL official, Dennis Kayser, who wanted the UFC team to leave the building.

When Senior Director of On-Field Operations for the NFL, Dennis Kayser,  spotted a woman and a camera crew walking around the Prudential Center floor asking some Broncos to pose with the title belt, that wasn’t going to fly.

“What is that?” the NFL official asked.

“The UFC title belt,” the woman responded. “Want to hold it?”

“We don’t want this around here,” he said. “This is wrestling stuff, right? Yeah, we don’t want that associated with us and this event. This is the NFL.”

The UFC team was saved by none other than FOX Sports reporter and MMA fan, Jay Glazer, who convinced the NFL official that the team was ok and fit to stay.

Both the UFC and NFL air on the FOX television network, but I guess that doesn’t mean they have to respect eachother.