Velasquez vs. Werdum targeted for June in Mexico 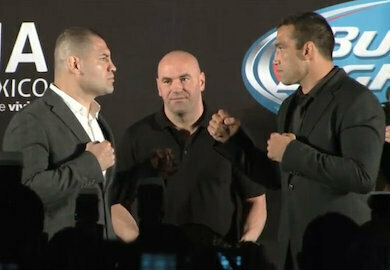 According to UFC President Dana White, Werdum will likely get the chance to unify the heavyweight belts with Cain Velasquez this upcoming June at another event back in Mexico.

The UFC currently has one PPV event set for June of 2015, as UFC 188 is pegged for June 13. A location or venue for the event have yet to be announced.

Werdum and Velasquez were supposed to meet at last weekend’s UFC 180 event in Mexico City, however, Cain suffered a knee injury 3 weeks prior to the show and was forced to pull out of the title bout.