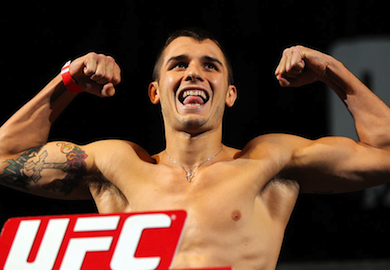 Lightweights Myles Jury and Abel Trujillo are set to duke it out at ‘UFC Fight Night: Swanson vs. Stephens’ on June 28th in San Antonio, Texas. The bout was made official when UFC.COM announced it on Thursday afternoon.

Myles Jury turned some heads when he debuted at ‘The Ultimate Fighter 15 Finale’ in 2012. He forced Chris Saunders to submit in the first round and went on to make a name for himself by defeating the likes of Ramsey Nijem and Diego Sanchez. Jury is undefeated in his professional mixed martial arts career at 13-0.

Abel Trujillo is coming off his ‘Knockout of the Night‘ and ‘Fight of the Night’ performance against Jamie Varner at UFC 169. The fight took place in New Jersey and it gave the crowd in attendance a much needed jolt of energy, making up for a decision-heavy card. Trujillo will be looking to add a ‘Performance of the Night’ bonus to his resume with a win over Jury in June.