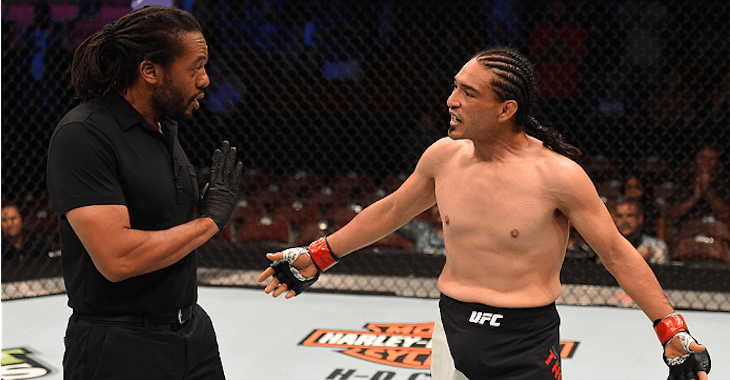 I would say things could be worse for this UFC fighter, but man, right now that seems like that’s really not possible.

UFC lightweight Francisco Trevino took on newcomer Sage Northcutt at UFC 192. Trevino failed to make weight for the fight, coming in at 160 pounds, but that was just the start. Trevino went into the octagon on Saturday night hoping to shut down the hype train before it even got started. That didn’t happen. Instead he lost to Northcutt in under a minute, suffering a TKO loss.

After the referee stopped the fight Trevino got up and started yelling at the referee, than did something you should never do and actually pushed Herb Dean.

So all that already makes for a pretty bad night, but now, news has come out that Trevino has failed his drug test from that fight, testing positive for marijuana.

Trevino had 69 ng/ml of marijuana metabolites in his system and the Texas threshold is 50 ng/ml. Texas Combative Sports Program director Greg Alvarez confirmed to MMAFighting that the fighter will be suspended for 90 days. After his suspension is handed down a hearing will be set to determine the fine he will have to pay. And that’s after he already had to give up 20% of his purse for missing weight.

As for the whole pushing a ref thing, he won’t be disciplined for that. Dean apparently didn’t want to proceed with any kind of punishment, saying that they handled everything in the cage right after the incident occurred.

So, I guess that’s the one ray of light in this whole thing. We’ll keep you posted on any further details surrounding Trevino’s horrific night.

What do you guys think, should the UFC give him the axe and cut him from the promotion? He’s currently 1-2 in the UFC.