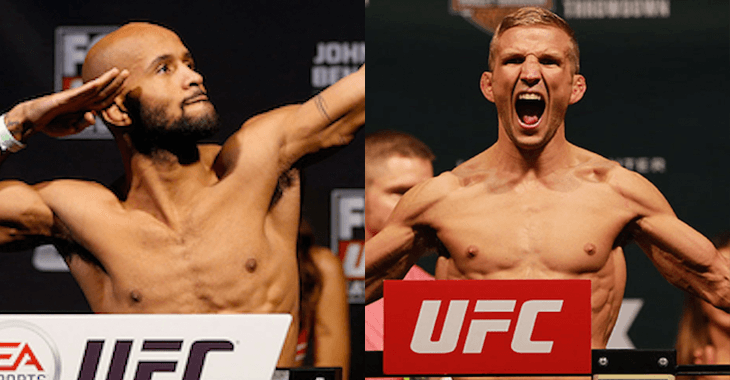 Despite fans saying otherwise, Demetrious Johnson’s run as UFC Flyweight Champion could be one of the most dominant title runs in the company’s history. Johnson is currently riding an amazing nine fight win streak and has successfully defended his championship seven times. He hopes to one day break Anderson Silva’s record of ten consecutive defenses, and is on pace to break it by early-2017.

Before he breaks the record, however, he may be stepping into the octagon to square off with the company’s bantamweight champion TJ Dillashaw.

“Mighty Mouse” was recently asked by MMA Mania his opinion on fighting Dillashaw and he says he is open to the idea… so long as it makes business sense.

“Me and TJ were texting already today and me and him are cool. It’s not like we have beef against each other. If the numbers are right and financially it makes business sense then I’ll do it, but right now I’m fixated on that record, which is 10. When I first got the belt, I was just out here trying to win as many fights as I can. It’s still the same thing, but now as I get closer to the number 10 I’m like holy s—t, I can probably beat it regardless if I have to fight Joseph [Benavidez] again or whoever they put in line.”