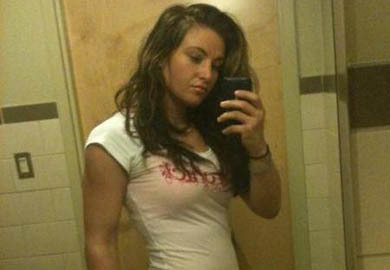 We’re at the top of the mountain now that’s kind of how I feel anyways, with this accomplishment coming into the UFC, we’ve kind of reached that final goal. But we had to start at the bottom and a lot of the pioneers Tara (LaRosa), Marloes (Coenen), Molly Helsel, the girls that were really fighting back in the day before we were making any kind of money, or there was any kind of publicity, or much acceptance of it.

We were fighting for this, right here, right now. She’s getting a lot of the credit and the limelight, but people who follow the sport understand there was a lot more getting to this point. I hope people can recognize that and give all the women that have worked really hard some credit.

I would love to be a part of the first women’s MMA fight in the UFC, but if I’m not I’m not going to focus on the negative. I’ve just been thinking about that a lot, my goal is to get into the UFC regardless and at this point I consider myself in the UFC.

It’s happening, Dana’s made it very clear that it’s happening, and amongst personal talks with him and Sean (Shelby) and everyone I’m definitely pretty sure the UFC’s in my future.”