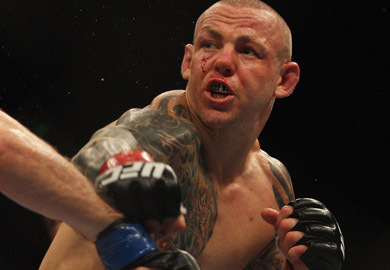 During Tuesday’s new edition of “UFC Tonight”, UFC officials announced that a lightweight bout between Melvin Guillard (31-12-2 MMA, 12-8 UFC) and Ross Pearson (15-6 MMA, 7-3 UFC) has been added to the UFC Fight Night event scheduled for October 26 in Manchester, England.

Guillard is coming off an impressive “Knockout of the night” performance, defeating Mac Danzig at last month’s UFC on FOX 8 event in Seattle. Prior to the victory, “The Young Assassin” was in quite a slump, going 1-4 in his past 5 octagon appearances.

The winner of “The Ultimate Fighter Season 9”, Ross Pearson has found new life since returning to the UFC’s lightweight division. After a short stint at featherweight, which saw the Brit go 1-1, Pearson returned to the UFC’s 155-pound ranks with a KO win over George Sotiropoulos in December of 2012. “The Real Deal” was then pitted against Strikeforce crossover Ryan Couture, who he promptly TKO’d at April’s UFC on FUEL TV event in Sweden.

The contest will serve as the evenings co-main event, with Michael Bisping vs. Mark Munoz getting top billing.

Stay tuned to BJPENN.com for further updates on this event

This article appeared first on BJPENN.COM
- Advertisement -
Previous articleOvereem: I still want to be UFC heavyweight champion
Next articleJones: I can’t let Gustafsson crush what I’m trying to build