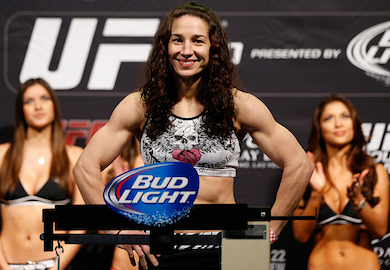 The UFC announced today that former women’s bantamweight title challenger Sara McMann will get to welcome UFC newcomer Lauren Murphy to the cage at UFC Fight Night 47 in Maine next month.

While McMann is coming off a loss to Ronda Rousey, she looks to get herself back in the title picture with a win over Lauren Murphy, who is undefeated in 8 professional fights.

UFC Fight Night 47 is on August 16th in Bangor Maine, the following bouts for the card have been announced:

This article appeared first on BJPENN.COM
Previous articleDavis Wants Quentin Tarantino To Walk Her To The Cage – What?
Next articleChris Dempsey Replaces Lawlor at Fight Night 46
© Newspaper WordPress Theme by TagDiv