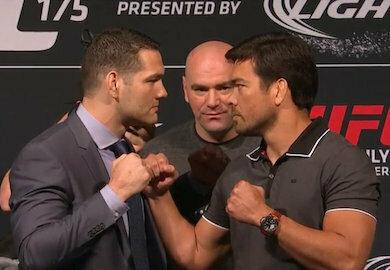 Former UFC light heavyweight champion Lyoto Machida believes that distance and technique will be the two key factors in defeating Chris Weidman at next weekend’s UFC 175 event in Las Vegas.

The statement was made by “The Dragon” in a recent interview with MMAFighting.com as transcribed by Dave Doyle:

“Chris Weidman is a tough guy, he’s well rounded. He’s known for being a wrestler, he’s very good on the ground, he can knock people out standing up. But I’m not too worried about Chris Weidman’s strong points. I’m focused on what I do well and that’s what I’ll focus on when I’m in the Octagon.”

If Machida is able to defeat Weidman in the headlining bout of Saturday’s UFC 175 event, he will become just the third man in UFC history to earn belts in two different weight classes. The other 2 men are Randy Couture and B.J. Penn, both of whom Lyoto Machida has defeated in the past.