Machida Camp: ‘Only fight that makes sense is C.B. Dollaway’ 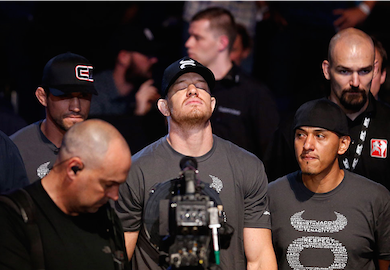 C.B. Dollaway may get a huge, and well-deserved, opportunity to face a former champ and middleweight title-challenger in Lyoto Machida.

While nothing is yet official, preliminary reports from FOX Sports came out last about the potential matchup.

“Last week it was reported that Lyoto Machida might be facing Luke Rockhold”, said FOX Sports reporter Ariel Helwani. “But this was before Michael Bisping won his fight last weekend against Cung Le in China.”

“It seems now that Bisping will be partnered with Rockhold. That leaves Machida without a fight and Machida’s camp doesn’t call people out, but they say the fight that makes sense now is C.B. Dollaway. Nothing is official yet.”

Dollaway’s camp has yet to respond, but one would think that any fighter serious about title contention would jump at the opportunity.