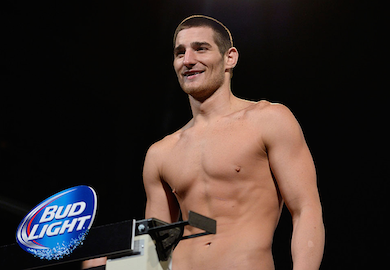 Luke Barnatt was last seen in action earlier this month when he defeated Mats Nilsson at the ‘UFC Fight Night 37’ in London. The pressure of fighting in front of his home countrymen didn’t phase Barnatt, as he was able to score a highlight reel first-round TKO victory.

Meanwhile, Sean Strickland is coming off a first-round rear-naked choke victory over Robert McDaniel just 10 days ago at the UFC 171 in Dallas, Texas.

The ‘UFC Fight Night 41’ event takes place May 31 live from the O2 World Berlin in Germant. The event is headlined by a middleweight bout between former Dream and Strikeforce champion Gegard Mousasi (34-4-2 MMA, 1-1 UFC) taking on the always dangerous Mark Munoz (13-4 MMA, 8-4 UFC).