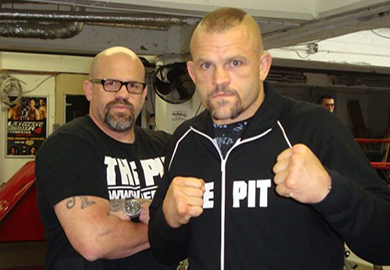 “Chael’s a nice guy,” said Liddell. “I’ve met him and hung out with him. I like him, and he’s a nice guy. I can’t stand the way he promotes fights. I understand what he’s doing; he wasn’t the most exciting fighter, so he made himself exciting by promoting the fight really well, and he got himself a couple of title shots for it. It works, but that whole crazy WWE-type stuff, that over-the-top stuff when you’re fighting a guy, doesn’t make sense to me, and I don’t like it. But, it is what it is. Some of the fans like it, and it gets people to watch fights, that’s fine.”

“Some of the things he said, as far as I’m concerned, are over the line. Unless you’re known as an actor or being a WWE guy, you can get away with some of that stuff because everybody knows it’s fake.”

Chael Sonnen was recently in a ‘brawl’ with Wanderlei Silva while on the set of TUF Brazil 3. That brawl apparently left both fighters banged up, and thus delayed their fight-date by 30 days and some change.

“I’m sure he didn’t mean to start it, but I wouldn’t be surprised if he crossed the line and Wanderlei took a swing at him,” said Liddell. “Everyone has a line, and especially fighters.”

Stay tuned to BJPenn.com for all your mixed martial arts news.