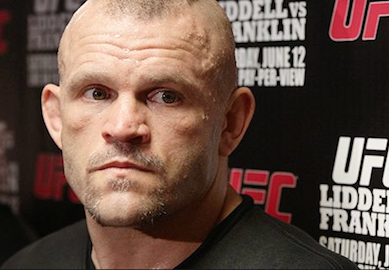 “I would have done anything just to keep the fight. I’ll fight anybody. I’ve already done all the training and I’ve already gotten ready for it. I’m in great shape and I’m the best light heavyweight in the world, I shouldn’t be afraid to fight anybody.”

“I think pulling out of [UFC 151] really fight really hurt him with the fans. That was, you’re fighting a guy coming up from a weight class down, who, when you’re given a chance, I heard an excuse about him being a southpaw, I mean, c’mon, you fought a [lefthander] the fight before. And it’s not like Chael is a slick southpaw, a slick striker, he’s a brawler with the stance because he shoots that way. Pulling out of that probably hurt him with the fans, I mean, it’s just I think some of the stuff he says they don’t agree with. You can’t have everything.”

UFC 151 will forever go down as the first (hopefully only) UFC event to get cancelled. Jon Jones held the card in his hands and after turning down a last-minute booking against Chael Sonnen, the UFC opted to cancel the show, entirely.