Home » UFC NEWS » Josh Thomson: Give me Anthony Pettis, then a title... 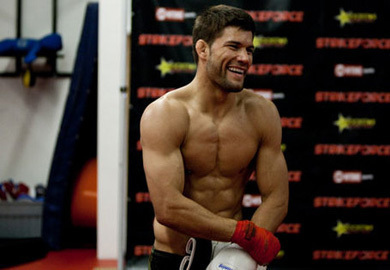 UFC lightweight contender Josh Thomson (20-5 MMA, 3-1 UFC) is coming off a huge TKO win over former #1 contender Nate Diaz back at UFC on FOX 7 in April.

Now, the former Strikeforce lightweight champion has his eyes set on one man and one goal as he told mmajunkie.com in a recent interview:

“I’m just begging and pleading to Joe Silva and Dana White to give me the Pettis fight.”

Anthony Pettis (16-2 MMA, 3-1 UFC) was recently forced to withdraw from his scheduled featherweight title fight opposite Jose Aldo at next month’s UFC 163 event in Brazil due to a knee injury. Now, Pettis has said he wants to return to lightweight and possibly fight the winner of UFC 164’s headliner between champion Benson Henderson and challenger T.J. Grant.

“You pull out of 145(-pound) fight, and from what I understand he’s waiting to fight the winner of T.J. and Benson, so I feel like I’m the guy,” Thomson said.“You need to get through me to get there. I’m the No. 1 contender right now. No one else is.”

Although he’s heard that Pettis is content to hold out for the Henderson vs. Grant winner, Thomson stated they can avoid the wait and put on a truly spectacular #1 contender’s bout in the meantime:

“You don’t need to wait much longer,” he said. “I’m right here. You haven’t fought in more than a year, and the whole world wants to see me and you fight. And I’ll tell you right now, it’s not going the distance. Stylistically, someone’s getting knocked out. The fans will win with that fight.”

Thomson went on to say that it’s nothing personal against Pettis, Josh just knows he won’t get to the front of the line until someone else is out of the way:

“I’m a big fan of Pettis, and I have a lot of respect for him,” Thomson said. “But I feel like that they hold him on such a high pedestal that he’s the only thing standing between me and a title shot. My whole career has been about that title, and there’s not a bigger title in the f—ing world.”

A lightweight fight between Josh Thomson and Anthony Pettis would certainly equal fireworks and would ultimately lead to a clear top 155-pound contender. What are your thoughts? Is this a fight you would like to see made? Let’s hear it Penn Nation!