Josh Barnett: “I Want To Fight Everybody” 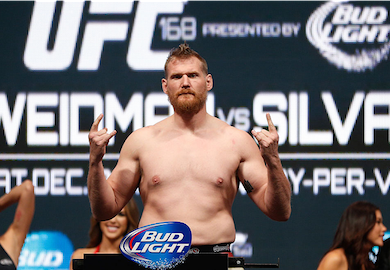 Former UFC heavyweight champion Josh Barnett spoke with MMAMania.com at Glory 17: Last Man Standing this past weekend to catch up and talk about “The Warmaster’s” future with the UFC, why he called out Junior Dos Santos, and his upcoming Metamoris match against Dean Lister.

“I want to fight everybody, but honestly, it was my manager who said it. He made the quote, but he didn’t quote me when he said it,” Barnett told MMAmania.com at the GLORY event over the weekend. “So, I mean sure, whatever, all good by me. I don’t call people out. That’s why for one, you have to understand grammar and syntax. That’s his comment, not mine. If I call someone out, I just show up at their doorstep and fight them right then and there.”

The topic then shifted to Barnett’s upcoming Jiu-Jitsu match against Dean Lister at Metamoris, and how Barnett looks to put catch wrestling on the map in Jiu-Jitsu competition.

“It was just a really great opportunity and a chance to put catch wrestling on a big stage in terms of the grappling world,” said Barnett, who last competed in grappling back in 2010 at the Gracie U.S. Nationals. “Dean Lister is an awesome guy and an incredible competitor, be it MMA, or grappling. It was pretty hard to say no.”

“I don’t know necessarily like me, I like to think I’m pretty unique,” said Barnett in his familiar wittiness. “I think someone with my style and my wrestling background will make for something they are not used to seeing. Whether they like it or don’t, I guess it won’t matter as long as I win, but I feel pretty confident that they will be impressed.”