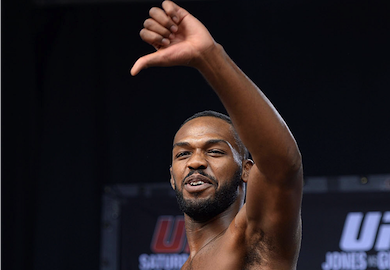 “I think it is interesting when people call you fake when they don’t know you personally,” Jones said. “I think all of us as human beings, we have many sides of us, many aspects to our personalities. You know, you can be angry sometimes, you can be happy sometimes, you can be sad sometimes. Sometimes you have your business hat on, we all have many hats throughout the day. That’s who I am. I have many different sides to me.”

“For someone to call me fake, it holds no weight. If it was a trainer, or a close friend, or my fiancee, then that would mean a lot more. ‘Fake’ is something that kind of stuck with me since I fought Rashad Evans and now it’s [Cormier’s] go-to ammo. You can’t criticize my MMA game too much, so they attack my character and my personality. It has no relevancy because none of these guys actually know me.”