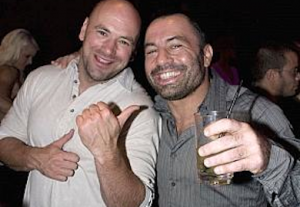 Ronda Rousey recently beat fellow Olympic medalist Sara McMann at UFC 170 via first round TKO, so where does the champ go from here? A lot has been said following that fight about there being no real threat to Rousey and her belt. Currently the two names expected to be in line next for a shot at the champ are Cat Zingao and Alexia Davis. Zingao earned her shot a while ago when she beat Miesha Tate, but was sidelined due to injury. Davis is coming off of a split decision win over Jessica Eye, one that a lot of people had going the other way. So it will definitely be one of them next right? Not so fast says Joe Rogan.

Rogan recently spoke with KROQ’s Kevin and Bean Show. When the host started talking about there being no one to challenge Rousey, Rogan had this to say,

“You might actually know, but I can’t tell you,” claims Rogan. “I can say no more than I’ve already said. I will tell you this, and this is a KROQ exclusive, within the next probably week or so a huge announcement will come about women’s fighting and I’ll be back in [the studio] and we’ll talk some more. It’s going to be crazy. Madness. I wish I could [talk about it now], but I would betray the confidence of my friend and employer.”

What’s the big announcement?! Could we see Holly Holm or Cyborg in the octagon to challenge Rousey, or is it something else, like maybe a tournament style bracket to determine the next challenger. I guess we will have to wait. Be sure to check with BJPENN.COM for the latest on this upcoming announcement.