Joe Riggs Details Near Death Experience After Being Shot 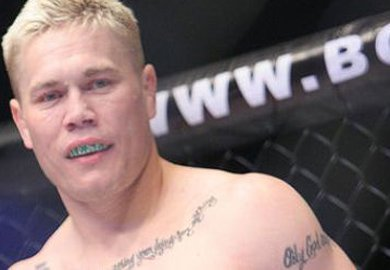 Joe Riggs was expected to make his long awaited return to the UFC in September against Paulo Thiago, however a gun accident left Riggs with several gruesome injuries to his hand and leg that forced him off of the UFC Fight Night 51 card and left him hospitalized. Not only was Riggs hospitalized, he needed a blood transfusion and his heart rate dropped to around 10 beats per minute.

Riggs spoke about the situation, which was much more intense and severe than anyone knew, on The MMA Hour.

“I lost consciousness before the Air Evac got to my house, so I was laying there and my wife was putting her entire finger in my wound, because she thought my femoral was hit and all that stuff,” he said. “When you don’t feel pain anymore, that’s not a good thing, and it started to not hurt. And I started to let go and go to sleep. So, I know those things sort of go hand-in-hand with dying. So I told my wife to get my son from the bedroom so I could say goodbye to him. And it is something that must have been very traumatizing to my son. But I said it to him because I thought I was going, and it was just a sad situation for him.”

While many criticized Riggs for his apparent lack of firearm safety, Riggs refuted the claims, explaining that he was disassembling the weapon in order to remove the round which was stuck, not cleaning the weapon with a loaded round as was initially reported. The round discharged and went through Riggs hand and into his leg.

“Everybody was asleep in my house,” he said. “It was only 8:30, but everybody was asleep. Nobody heard it. You think when something like that would happen I would be calm, cool and collected, but I got up and ran around the house like a chicken with its head cut off.

“I’m laying there and then I see blood spurting up, and I’m like, okay, I should wake [my wife] up, and…I said, Lisa, call the ambulance, I’ve been shot, and we went from there.”

“When I lost consciousness and I came back to, it was a feeling of any worldly stress you have, gone…it was a crazy feeling,” he said. “The feeling of dying was very easy. The feeling of wanting to live and to fight through that pain was awful. It would have been very easy to let go and die. But I guess for a reason I’m here, and I’m alive, and I’m able to fight again unbelievably. My hand, I can make a fist, and yesterday I actually did my first workout. The doctors are astounded at how fast the rehabilitation has gone.”

“I’ll be ready to fight in December, whichever show it may be,”

Riggs concluded the interview by saying: