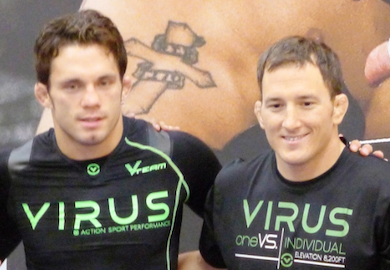 Joe Ellenberger (14-1 MMA), the twin-brother of UFC welterweight contender Jake Ellenberger, has apparently inked a four-fight deal with UFC according to a report from MMAFighting.com.

Joe Ellenberger was a high school wrestling champion in Nebraska, and went on to become a two-time Division II All-American at the University of Nebraska. He is currently riding a 2-fight win streak, most recently defeating Joe Wilk via first-round TKO at the “Victory Fighting Championship 38” event in 2012.

This is really a dream come true for the 28 year-old, Ellenberger, as only a few years ago he was told by doctors that he may not live passed the age of 30:

The year was 2009 and Joe Ellenberger was currently sporting a perfect professional mixed martial arts record of 10-0.

It was at this time that Joe was diagnosed with paroxysmal nocturnal hemoglobinuria (PNH) by doctors, a rare disease that destroys red blood cells.

The news was shocking and horrible, as doctors told Joe that he’d not only never fight again, but that he would likely not live passed the age of 30.

All hope seemed to be lost, until Joe met with a blood disorder specialist who prescribed him a very expensive drug called Soliris.

The drug, Soliris, has worked wonders for the lightweight prospect, but at a very hefty fee of $400,000 annually.

In 2011, Joe was declared healthy enough to resume fighting. Since then, Ellenberger has gone 4-1 and will be riding a 2-fight win streak when he makes his long-awaited octagon debut.

Though nothing has been confirmed by UFC officials, Joe’s brother Jake Ellenberger told MMA Fighting that he thought his brother would debut in March or April of 2014.

Which lightweight would you like to see Joe Ellenberger pitted against first? Let’s hear it Penn Nation!